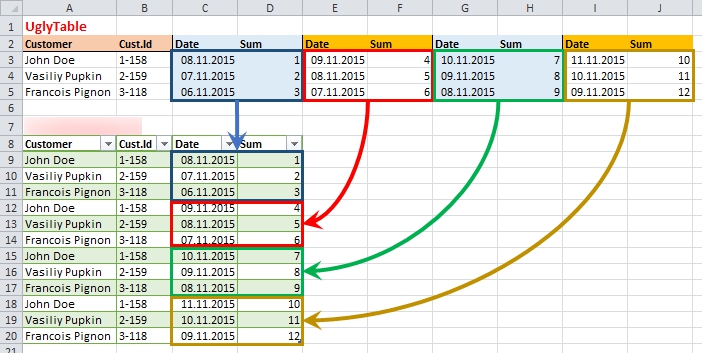 For demonstration purposes I prepared a sample workbook, where source is in named range “UglyTable” (I was ruthless). You can download it here.

The first solution (looking obvious) for this task that I found after some googling and thinking was using of “append queries” method.

Indeed, if we want to place one table below another with the same structure, we need to append. So the algorithm for this method is in next steps:

Here is a simple code in M language to perform this transformation:

Although it can be done with UI on all stages, this method has a lot of manual work. When performing it with UI only, you need to create as much queries as number of repeating groups you have, and then append queries one by one in corresponding number of steps.

In sample code above I shortened this steps and place it in one query, but it takes a lot of editing.

And the main lack of this method is that whether number of groups changed, you need to add/remove some queries and edit last step (appending). So this solution could be made if you sure that table’ structure will be the same all time long.

As I was dissatisfied with the first method, I resumed googling and then asked Gil Raviv (a Microsoft fellow who runs Get & Transform Data in Excel 2016 blog on TechNet) in Twitter. He supposed another solution, based on a little tricky instrument he used when unpivoting nested tables.

Here the steps for this method:

I love this trick – it is really interesting and not obvious. The idea is simple: as we cannot just unpivot this table because we have more than one column of the same data, we merge these columns in one, and then we get a pack of columns that can be unpivoted in usual way. And all we need then is just split data to separated columns.

Here is the code of this query:

Columns merged and ready to unpivot

Actually this method could be performed with UI only, there are no need to manually edit any string in code editor. And it is fast when refreshing, too.

This approach I do not peeped and “invented” myself (although I’m sure I’m not the first one), so I proudly present it here.

Here is the full M code of this method from sample workbook:

This method could be applied on tables with any number of paired columns. This is main difference form first two approaches: it doesn’t matter whether number of columns increase or decrease, after unpivoting we will work with rows.

The first time I saw this trick was on Power Query TechNet forum, when Ehren, another good Microsoft fellow, used it to collect values from one column when grouping by values in another. I adopt it to this case, and it works perfectly.

I love this approach for its use of hidden treasures of M language. The algorithm used is simple, but very interesting. The first five steps is the same as in previous method (only difference that we will not add custom column but transform “Index” column):

As I told before, this approach is very interesting and useful for understanding some M language concepts. Also for this “group to records” trick doesn’t matter, how many columns we will unpivot and group: 4, 8, 98, etc., so this approach is more versatile than first two.

Every of these methods is suitable for different cases, but I prefer last two: they are more versatile and could be used on table of any size.

If you not familiar with Power Query “M” language, it is supposed to use third method: modifying indexes for grouping and pivoting.

But “grouping to records” method is more technological and fast, so if you don’t afraid to edit M code, this is recommended approach.

I tested all of four methods on the table with 30 pairs of Date-Sum columns, with 7000 of rows. You can see average results of performance I got:

I still don’t sure whether these results are really average. Try it yourself too.

Using the header of the report as the data for table columns in Power Query
BIN2DEC in Power Query: Implementations of List.Accumulate. Part 1