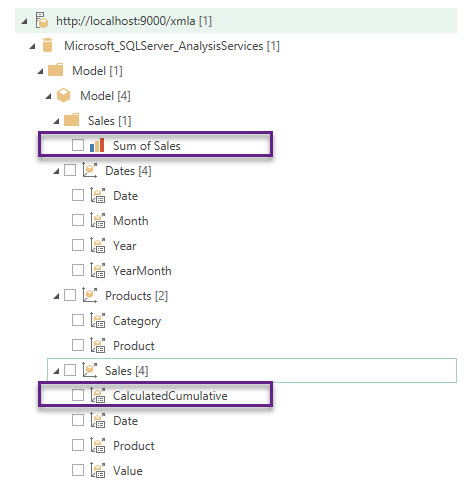 We can connect almost any data source in Power Query, but PowerPivot data model is not included in that extensive list of sources out of the box.

But with the help of the fabulous DAX Studio we can do it (although in my opinion it is still inconvenient and tricky) at least locally – from the same workbook in Excel or from Power BI Desktop.

All you need is to open your Excel workbook, run DAX Studio add-in and connect it to this workbook. Then you can just connect to the PowerPivot model as to SQL Server Analysis Services cube.

But this is an undocumented and extremely limited feature not supported by Microsoft, which can only be used under your own risk.

END_OF_DOCUMENT_TOKEN_TO_BE_REPLACED

In this post I describe how to implement the classical incremental refresh scenario for the cloud data sources in Power BI Service for Pro accounts. Step by step. It worth to read.

As I wrote in the previous post, we can implement a semi-incremental refresh for Pro accounts in Power BI, using just dataflows.

The method I described has a main lack: although the “historical” dataflow remains unchanged and will never load data from the source again, the “refreshing” dataflow will load the whole “fresh” part of data repetitively until you change the date intervals manually.

Initially – there’s small amount of data in the “fresh” part…

…but, after some consequential refreshes, it could become significant, and not so fresh.

You can again split “fresh” it in the two parts – “new historical” and “fresh”, and so on. But this is only SEMI-incremental refresh, and, of course, is not a good solution.

But, after some investigations, I found a solution which helps to implement the classical incremental refresh scenario, where the fresh data part remains small and fresh, and historical part become updated without querying a data source.

At least for the cloud data sources.

END_OF_DOCUMENT_TOKEN_TO_BE_REPLACED

After I published previous blog post about an incremental refresh for Pro accounts in Power BI, Microsoft MVP Parker Stevens from BI Elite channel kindly asked me to record a video for his channel. So here it is.

Here I not only introduce Power BI dataflows and describe the semi-incremental refresh concept, but also show how it works in Power BI Service.
Have a fun!

To my surprise, it has almost 1500 views in two days – not so bad 🙂 I understand that this happened because of hype topic, but, well… now I know how to remove some limitations and perform a CLASSICAL incremental refresh for some types of data sources. Blog post follows.

Incremental refresh is a high-demand option in Power BI. Microsoft already provided it for the Premium capacities, but for the Pro accounts it is still in waiting list.

However, with introduction of dataflows in Power BI Service, an incremental refresh implementation becomes available for Pro accounts too.

I won’t to describe dataflows in detail here since there is a lot of blogs and resources about it (but I’ll provide a few links in the bottom of the post).

All you need to know now on how to implement an incremental refresh, is that

Let’s start from this point.

What is the incremental refresh at all? In simple words, it means that in the single data import action we are refreshing (updating) only the part of data instead of loading all the data again and again. In the other words, we are dividing data in two parts (partitions): first part does not need refresh and should remain untouched, second part must be refreshed to bring in updates and corrections.

END_OF_DOCUMENT_TOKEN_TO_BE_REPLACED

Let’s say you have a few numerical columns [A], [B] and [C] in your table and want to sum them to the new column in Power Query or Query Editor in Power BI.

In Power Query we have special buttons for this:

For example, we want to sum columns [A] and [C]. Just click (holding Ctrl button) column headers you want to sum, then go to “Add Column” – “Standard” – “Add”, and you’ll get a new column named “Addition” with the row-by-row sum of desired columns:

If we want to add three columns at a time, then we’ll also get a desired result:

But if in this table we want so sum columns [A] and [B], we are not expecting a pitfall, aren’t we?

The reason of this behaviour is simple and it reveals itself when we look at our data a little bit close: there is a null in column [B] in that row. In Power Query formula language (M) the expression null + value always returns a null (see this excellent post of Ben Gribaudo about null type and operations with null values).

But why we get a correct result when we sum up three columns? It is because Power Query uses different formulas when we sum two columns or three and more columns:

List.Sum function used in this case ignores null values and sums up only numerical values. Indeed, it gives more intuitive result, but on the contrary has not such intuitive syntax of simple addition.

I do not know what is the reason of such difference, and already complained to the development team. But if you rely on the buttons there, then you have to be aware of such behaviour.

What is the possible solutions there? It depends on what you want to get as a result, but in any case you should take a look at the formula bar and decide what to correct there:

Ok, it is a really short post which I planned to (and ought to) write a long time ago…

Recently I needed to do the very simple thing in Power Query. I have the column of numbers and need to check if the values in this column are less than N and then put a corresponding text value in the new column. The function for the new column is something like this:

Actually some values are not a numbers but nulls:

And this simple calculation returns an error for these values!

Why? There is the catch, which is hidden in the depth of documentation (actually on the page 67 of the “Power Query Formula Language Specification (October 2016)” PDF which you can obtain there.

END_OF_DOCUMENT_TOKEN_TO_BE_REPLACED

This is a very short post, just to make a reminder and possibly expand knowledge for me and my readers.

Sometimes, specially when working with calendar tables, we need to calculate ISO Week Number for certain date. There is no native functions in Power Query / M language / Power BI to get ISO Week number, so to obtain the desired result you need to write your own function.

Thanks to Catherine Monier, Microsoft Excel MVP, for providing the link to the “Date to ISO Week” M function already written for us. There also another function for converting ISO Week date (format input like: 2017-W02-7) to the normal date:

This function is not so hard to develop, I think, but it is always better when somebody gives you ready-to-use solution, isn’t it? 🙂

List.Generate is the powerful unction of M language (the language of Power Query aka “Get & Transform” for Excel and Power BI query editor), used for lists generation using custom rules. Unlike in other list generators (like List.Repeat  or List.Dates), the algorythm (and rules) of creation of successive element could be virtually any. This allows to use List.Generate to implement relatively complex get & transform tasks.

Although there are few excellent posts about this function uses (for example, Chris Webb, Gil Raviv, PowerPivotPro, KenR), I always I always lacked a more “clear” description — «How it actually works?» or «Why don’t it work?» and, at last, «What did the developers kept in mind when create this function?»

Generates a list of values given four functions that generate the initial value initial , test against a condition condition , and if successful select the result and generate the next value next . An optional parameter, selector , may also be specified.

Will you receive a list of four elements? Do you want to use an optional selector? Really? Why not?

At least it is obvious that this function takes 4 arguments, all of type function:

Actually List.Generate uses quite simple loop algorythm. When creating an element of a new list, List.Generate evaluates a some variable (lets call it CurrentValue), which then passed from one argument-function to another in a loop:

As you can see from this not-so-technical description, the important difference of List.Generate from other iterator functions of M language is that almost all of others working in “For Each…Next” style (they have a fixed list to loop over), while List.Generate uses other logic – “Do While…Loop”, checking the condition before loop iteration. Subsequently, the number of elements in created list is limited only with “While” condition.

If we’ll write down the algorithm described above in other, non-functional language (like Visual Basic), it will look like that:

When you create a list using some API calls (for example, you send GET or POST requests to API in initial and next functions), you should consider the following:

It is convenient when both initial and next  return value of type record. This greatly simplifies the addition of counters and passing additional arguments for these functions (for example, one of record fileds is main data, second is counter, etc.).

Resuming, List.Generate is the powerfull tool, looking more complicated than in fact. Hope this post made it more friendly and comprehensible. 🙂

Recently I posted about UsedRange trap when importing from Excel sheet in Power Query (you can read this post there).

To add an option for users who can meet the same problems as me I’ve added corresponding Power Query improvement ideas on excel.uservoice.com and https://ideas.powerbi.com

Please add your votes to these improvements – I’m sure they can not only save you a few rows of code but also can save you from potential pitfalls when working with raw Excel data. 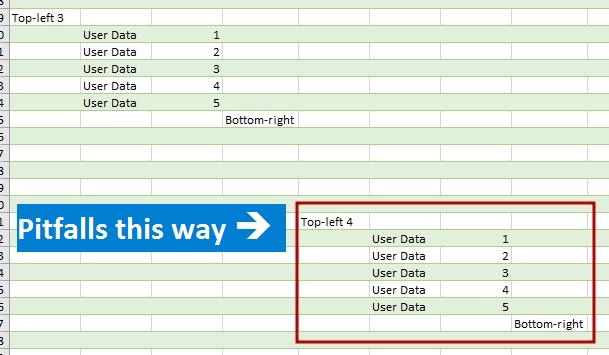